Annual celebration of the day Caesar got stabbed! 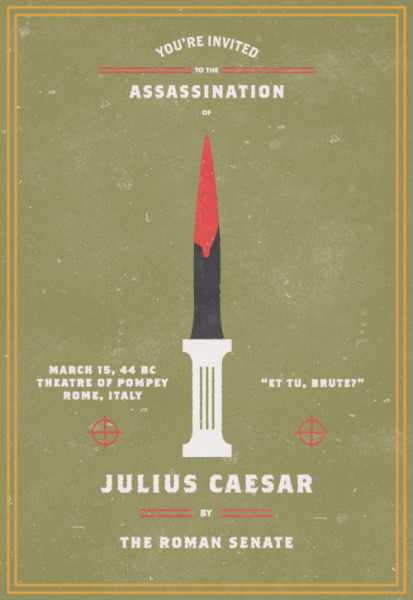 This entry was originally posted at http://dhampyresa.dreamwidth.org/175441.html and has

Gather round. It's time for me to go tl;dr about the Paris Commune.

A lot has been made of the Paris Commune, for various reasons -- mostly because it's where Marx derived the term "communism" from -- and it's been romanticised a lot. I'll say upfront that I'm not exempt from said romanticisation, but I'll try to be as objective as possible (keyword being "try"). I don't doubt there's much better historical scholarship on the Commune than what I'm about to write, but I've got a book of collected and contextualised first-hand accounts ("La Commune de Paris racontée par les Parisiens") next to me and I'm ready to roll.


No lie, "The Paris Commune survives somehow" is right up there with "Carthage wins the Punic Wars" as far as my favourite alternate history scenario go.


* Louise Michel's really rad. She asked to be shot along with the rest of the Communards -- "Puisqu'il semble que tout cœur qui bat pour la liberté n'a droit aujourd'hui qu'à un peu de plomb, j'en réclame ma part" ("Since it seems every heart that fights for liberty is today given only lead, I demand my share") -- was deported to New Caledonia, sides with the Kanaks against the French government, returns to Paris accalimed by the crowd (shouting "Vive la Commune!" and "Down with the assassins!") and becomes an anarchist. She never stopped fighting. Podcast on Louise Michel (in French).

(I'm also really fond of La danse des bombes, a song based on a poem by Louise Michel.)

This entry was originally posted at https://dhampyresa.dreamwidth.org/170887.html and has

Thank you for writing for me! I'm sure whatever you write me will be wonderful.

Feel free to poke around this journal or my Ao3 account (username: sevenofspade) if you want to. My letters tag is here.

I have three Do Not Wants: incest, rape and child abuse. When these are canon, please don't focus on them. I'd also prefer is you didn't dwell on any suicidal ideation or prolonged descriptions of grief. I would also prefer not to have to deal with people losing things important to them and toxic living arrangements, be that family or roomates. Thank you.

On the other hand, there are a lot of things I do want. Here’s a partial list. (I obviously don’t expect you to stick all of these in one story, that would be impossible.)

I have a history tag, btw. I like history a lot.

Hannibal Barca + Scipio Africanus
An AU in which they're somehow on the same side (whichever). The Pun-ic War (I LIKE PUNS OK). IN SPAAAAAAAAAACE AU. Hannibal wins AU. He's a Carthaginian general sworn never to be a friend to Rome, he's a Roman general trying to avenge his father's death by Carthaginians, TOGETHER THEY FIGHT CRIME.

I ship them, but you can totally go gen or with other ships instead, idc. Hannibal/Maharbal? Yes. Aemilia/Scipio? Also there. Ditto Aemilia/Scipio/Hannibal.


Dido + Augustus
Sometimes I do that thing where I mention a crackship* and accidentally talk myself into being invested in it. Case in point. That said, I think they would have fascinating discussions about empire-building, making your way to the top and basically, statescraft in general. Is there tension because of the Aeneas and Carthage burning things? Are they bros in the afterlife?

* Where ship = any kind of relationship, not necessarily romantic.


Joan of Arc
Jeanne d'Arc is FASCINATING and I'm not just saying that because I'm French. Tell me about the voices and the visions -- how do they manifest? Are they real? (I'm okay any way you want to spin this, from delusion to God to some other sort of spirit -- I'm agnostic myself, but the framing of Joan as prophet is fascinating to me.)

I'd love an AU in which she never dies and by never I don't just mean 'survives teh pyre', I mean 'never'. Immortal Joan! Possibly ruling France!


Cornelia Africana
I am SO THERE for Cornelia being a badass and laying a political smackdown on whoever the fuck. But I am also here for something between her and her relatives, be that her daughter or her sons (the Gracchi -- I love them too, btw) or her sisters or her father (Scipio Africanus).

I'm really curious about how she felt about having a statue in the Field of Mars -- especially since she was probably the first woman in this position!

Tell me about the women in her life, the other queens and princesses she had to deal with, be they dowager queens or secondary wives of her husband, or even her mother, sister and daughter.


Thank you so much for writing for me!

(Comments welcome.) This entry was originally posted at http://dhampyresa.dreamwidth.org/142892.html and has

Today, I'm going to talk about one fascinating episode of French history.

The year is 1764 and the place is Gévaudan, a cozy little region in the south of France.

The Beast of Gévaudan's first official victim was killed on June 30.

I'm not saying it was werewolves, but... This entry was originally posted at http://dhampyresa.dreamwidth.org/94115.html and has

Following the 101 primer,I will now answer some follow-up questions.


Does anybody know why Hannibal didn't march on Rome when he could? And also exactly under what circumstances did Hannibal and Scipio die the same year, were they in completely different places fighting other people or..?


Why did Scipio's relationship with Rome get sour?


How come Scipio and Hannibal didn't cross paths in that last war of theirs?


Could you tell us more about Hannibal's family? Like, his father got a kingdom in Spain?


Also, what do you think the powers that be in Carthage think was going to happen with Rome? In not helping Hannibal there, they passed up on an opportunity to storm Rome and possibly crush their enemy. Were they that certain of their ultimate victory in the conflict? Was it just unthinkable to them that Rome would win?
( Collapse )


What did they look like? How do you picture them for shipping purposes?


Are there other members of Hannibal's army named besides Maharbal and his brothers Hasdrubal & Mago?


I have feelings. SEND HELP.
This entry was originally posted at http://dhampyresa.dreamwidth.org/93196.html and has


This was my assignment and it was great fun to write! It's an idea I've had ever since this comment thread. It's stayed pretty similar since then. I mentionned it at the end of this entry with "1) a buddy cop AU, 2) one of them's a ghost, 3) there are flying cars 4) and also togas, 5) the mob's involved, 6) there's a West Side Story-esque subplot involving neither of the buddy cops and 7) familial relationships between characters are changed. And before you think that's all, it is also 8) a murder mystery". As you can see, only point 7 has changed -- that really helped streamline the story, oddly enough. (Point 6 was moved to its own story, see below.)

Notes on various characters and concepts appearing in the story. (I deliberately threw various periods of Ancient History into this AU.)
( Collapse )

FC Barcelona 1 - 0 AS Roma (630 words) by sevenofspade
Chapters: 1/1
Fandom: Ancient History RPF
Rating: Not Rated
Warnings: Creator Chose Not To Use Archive Warnings
Characters: Hannibal Barca, Scipio Africanus
Additional Tags: Alternate Universe - Football
Summary: A quiet moment after the game.
This was the one pinch-hit the exchange had. I had great fun writing it as well! And I can't believe no one made the Barca/Barça joke before.

(I picked AS Roma more or less at random, but it was an inspired choice. The Barça itself describes them as familiar rivals.)

Scipio and Hannibal, through the years.

I woke up at 1PM on Sunday and said to myself "fuck it I'm writing the Hannibal/Scipio mobsters AU". And I did! Even though I took five/six hours out of my ten to meet with a friend and see Tale of Tales (would not reccomend, btw). It could have been better if I'd had more time, but I enjoyed writing it and I like how it turned out anyway.

This entry was originally posted at http://dhampyresa.dreamwidth.org/93008.html and has

The collection is open! There are 16 works, of which I wrote 3. You can try to guess which ones they are, but I suspect it will not be much of a challenge.

I got two fics! Well, a fic and a treat.

Hannibal and Scipio set the record straight about ancient Eurovision.

It's said that Sappho killed herself by jumping off a cliff when she failed to win the heart of the beautiful ferryman Phaon. This tale has the story backwards, for in fact Sappho died not at the end of her life, but at the beginning.

This fic speaks to me on such a deep level I don't even have words for it. IT'S WONDERFUL.

I'm so glad I ran this exchange, you lot, SO GLAD.
This entry was originally posted at http://dhampyresa.dreamwidth.org/91279.html and has

I am here to talk about the clusterfuck that is the Vlad Tepes/Mehmed the Conqueror/Radu cel Frumos relationship.

I hope you will forgive the informal tone of this and any possible mistakes, because it's not my area of expertise (for a given value of expertise), but I will try my best to explain why this period of Wallachian/Ottoman histoy is super interesting!

So there you have it. This is what Wallachia/the Ottoman Empire looked like in the 15th century.


And now I will go meet with some friends and then see Mad Max:Fury Road in theaters for the fifth time.

This entry was originally posted at https://dhampyresa.dreamwidth.org/88868.html and has

Thank you so much for writing for me! You're amazing! And anything you write will be amazing! (I'm honestly not difficult! And possibly addicted to exclamation marks!)

I have three DNWs: incest, rape and child abuse.

But just write whatever inspires you the most!

Prompts in chronological order, btw. You will notice they tend towrds the "TELL ME EVERYTHING" side of things, because I would be legit delighted to get anything about any of these folks (and having to pick who to request from the nominations was such heartache, let me tell you).


Thanks again for writing for me!

This entry was originally posted at http://dhampyresa.dreamwidth.org/82713.html and has

Of possible interest to some of you: I am now running

history_exchange, an exchange for fic about historical figures (ie, the non-zombie kind of dead people). The wordcount minimum is 500 words. Nominations are currently ongoing.

This entry was originally posted at http://dhampyresa.dreamwidth.org/81620.html and has

comments over there.
Collapse